Before the fall semester began, I had absolutely no idea what the term Public Relations meant. The only time I had ever even heard the phrase was watching “Sex and the City.” Carrie Bradshaw’s best friend, Samantha Jones, was the CEO of her own PR firm. That was the extent of my knowledge. I had never really thought about that career or what that job would entail. To be perfectly honest, I only enrolled in COMM309: Intro to Public Relations, because another class that I wanted to get into was full. But when Professor Bartoo kindly explained to us on the first day of class what it actually meant to be in the PR field, I began to realize that even though I didn’t know it, I have been surrounded by PR my whole life. An advertisement on a billboard that I pass while driving, logging onto the University of Delaware website and seeing blurbs about Homecoming, or even a brochure that’s handed to me while walking to class, public relations is everywhere. However, I still had no idea what an actual professional in the PR field would do in a typical day. If you asked me to picture a PR consultant in their natural state, I could not have done so. One of the definitions of PR given to us from our textbook is from Glen T. Cameron, of the Missouri School of Journalism. Cameron defines the field as the “strategic management of competition and conflict for the benefit of one’s own organization-and when possible- also for the mutual benefit of the organization and its stakeholders or publics.” Again, still clueless.  It wasn’t until we had the assignment to interview an actual professional who works in PR that I finally began to see what working in PR meant.

The assignment was to find someone that works in PR, contact them on the phone, set up an interview which will take place in their office, and write a report about it. My group contacted and interviewed Doug Eppler, the Public Relations Manager for Tipton Communications in Newark, Delaware. Before going on the interview, I researched Mr. Eppler to find out more information about his background and his key responsibilities for Tipton Communications. I was shocked to find that although Doug had a good amount of experience in communication related fields, a large part of his background involved working in theatres and the tourism industry. How do theatres and tours prepare you for working at a PR firm? Well, surprisingly they relate quite a bit. Doug’s Linkedin page describes his tasks as the Tourism Development Specialist for Winterthur Museum & Country Estate. Some of Doug’s responsibilities were, “marketing the world-class, world-renowned museum to Motorcoach tour operators, group travel leaders, private group trip planners, social clubs, etc., serving as liaison to state and county tour and travel offices and coordinating group travel advertising,” to name a few.  In the actual interview, Doug explained how his background as the Toursim Development Specialist, prepared him for his current job at Tipton Communications. He may not have to give tours anymore, but similarly to how he had to get tourists interested in the estate, he now has to get target audiences interested in his client’s product or service, whatever they may be.

From both my research and interview I started to see that there is no uniform public relations consultant. Just like PR can be found in various ways around my world, PR officials can be found in different places and different environments. There’s political PR, sports PR, television PR, and more. It’s the diversity of this industry that has kept me extremely interested in possibly pursuing a career in this field. 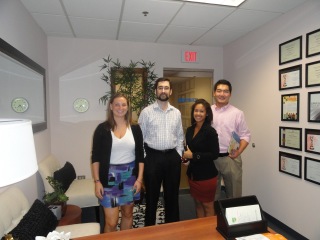