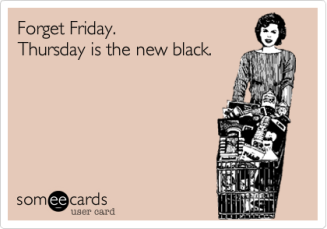 Public relations professionals sometimes stride a fine line between ethics and the bottom line. Companies want to make a profit while promoting social responsibility. The goal of smart, ethical public relations is to balance these seemingly opposite goals and prove that the best interests of both a company and its publics can mesh together.

This balance seems compromised with the advent of “Black Thursday,” when companies began Black Friday sales on Thanksgiving Day. This year, several stores including Walmart, Target, JC Penney, Macy’s, Kohl’s, and more chose to open their doors on Thanksgiving and commence holiday shopping a few hours earlier than usual.

What does opening on Thanksgiving say about these stores from a public relations perspective? Black Thursday sales cut into employees’ time with family while commercializing a cherished American holiday. The few extra shopping hours seem to come at the price of decreased workplace morale. It’s a PR dilemma between serving your employees or your client base.

Employees are the first ambassadors of any company. They represent a brand, and do so with credibility because they work on the “front lines” and not in the C-suite. It’s hard to argue that companies create loyal, happy employees by asking them to work on a family holiday. In Pizza Hut’s case, it didn’t create loyal, happy customers either.

How can companies combat negative perceptions of Black Thursday hours? It would be fascinating to see a public relations campaign that shows that a majority of consumers demand the earlier hours, employees are grateful for the extra income, or that CEOs themselves are willing to work on Turkey Day. At least such messages honestly and directly confront the cynical practice of opening stores on a major holiday.

The goal of public relations is to “build mutually beneficial relationships between organizations and their publics,” according to the Public Relations Society of America. The publics in question may benefit from more shopping hours, but the organizations don’t benefit from an image of disgruntled employees and corporate greed. It’s up to public relations professionals to help companies maintain “mutually beneficial relationships” this holiday season.

Maddie is a junior Mass Communication major with a minor in Public Health. She is a UD Social Media Ambassador and a member of PRSSA-UD and InterVarsity Christian Fellowship. Follow her on Twitter, @BlueHenMaddie.

One thought on “Thursday is the New Friday: The Public Relations of “Black Thursday””