Social media can become an addiction, especially when you have run out of shows to watch on Netflix or when you find yourself stalking anyone/anything imaginable.

Although contrary to popular belief, social media does dominate significant ideals and morals in our lives, including our political views. I will not discuss how solid statistics and facts read on new media (like Facebook, Twitter and Pinterest) are more likely to influence your personal views and future attitudes on political candidates, rather than opinions. Instead, I’d like to explain how your political view relates to your sense of humor, which in turn effects how you view social media. Social media is not only a symptom of a need to see an outsider’s view in order to create your own, but it also is a side effect of a changing technological world.

Conservatives tend to use exaggerated jokes that could be repeated several times and contain very clear punch lines. However, liberals tend to use jokes that incorporate sarcasm and irony. 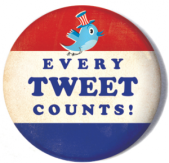 So, lets break it down. Your sense of humor ultimately defines what you find intriguing, and thus influences your social media searches and “likes.” Conservatives are looking for more “breaking news” stories, like a hot scandal on how Florida’s 29 Electoral College votes should have been given to Gore, and the votes must be recounted. Conservatives’ exaggerated news will change their attitudes to more intense and possibly instantly view changing, depending on the media’s emphasis or importance.

On the flip side, liberals’ ironic sense of humor can have them more infatuated with ironic news, such as a Harlem doctor who is trying to help cure Ebola patients, but cannot detect his own Ebola illness. What’s more ironic than a doctor trying to save Ebola patients, while potentially spreading that epidemic to America’s largest city? It provokes thought.

With these different senses of humors come different social media cravings and disputes, because you read it on the Internet, so it MUST be true. The overall problem is that we all find different things humorous; it’s that simple. If only there was a joke category all people always enjoyed and could fall back on. However, if that were the case, there would also be no need for persuasive social media tactics. Then what would we do on our unproductive procrastination Sundays?

Alexandra Chiodi, sophomore bachelor of arts in mass communication and bachelor of science in marketing, with a minor in advertising. She is currently the Co-Founder and Co-President of Pencils of Promise at UDel. Follow her on Twitter: @chiodii2 and @udelpop.