The word ‘interview’ often makes people cringe. Interviewers can be intimidating, stressful, and can make you rethink what you should and shouldn’t have put on your resume. People walk into interviews never fully knowing what to expect, and never fully able to figure out whether the words “we’ll be in touch” mean you got the job, or that you’ll never hear from the interviewer again.

However, thanks to PRSSA-UD’s skill slam on Monday, March 23, entitled “Break Through the Interview,” planned by the pre-professional organization’s Vice President of Professional Development, Laura Hepp, some of the PRSSA members had the opportunity to receive feedback from PR professionals on their interview skills, and their resumes.

I was fortunate enough to be allowed to sit through members’ interviews and take notes on the feedback professionals provided, as well as, listen to what they said are dos and don’ts for any interview. What I learned from sitting through these interviews was always expect a behavioral based question, and don’t let it frazzle you. Possible employers want to know that you can think on your feet, especially when they ask you a question such as “give me an example of a time you tried to accomplish something and failed.” This kind of question sends people into panic mode, but no need to panic. Turn a negative into a positive. Admit to the failure. We all have them, but make sure you end with how this failure bettered you in some way. 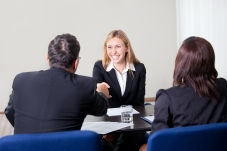 hand. It seems simple enough, but in the heat of the moment a lot of people tend to forget about this simple gesture. Don’t let that be you. A handshake and steady eye contact make you seem confident and they differentiate you from someone who is so nervous they almost seem unsure about their own abilities.

Always make sure to sound enthusiastic about what you love, and be able to verbalize how you’d be an asset to the organization whose position you are interviewing for. It’s nice that you enjoy your profession, but interviewers don’t care about why you think a given position is the best fit for you they care about why you are the best fit for them.

Lastly, as for resumes don’t be afraid to get specific. Explain in detail how you personally have positively impacted the places you have worked for and make sure to put the most important and relevant thing you’ve done at the very top of your resume.

This was my first PRSSA skill slam and based on what I learned, I encourage everyone to jump at the chance to participate in the next skill slam. Who knows, you might just take away from it.

Stephanie Pinilla is a junior Psychology and Interpersonal Communications double major, working toward a Women’s Studies minor. She is currently a general member of PRSSA-UD, and works as a media planner for Now Hear This UD public speaking competition. Stephanie hopes to end the year by becoming an Oral Communication Fellow and by becoming a more active member of PRSSA-UD. Follow her on Twitter, @lilpinil.