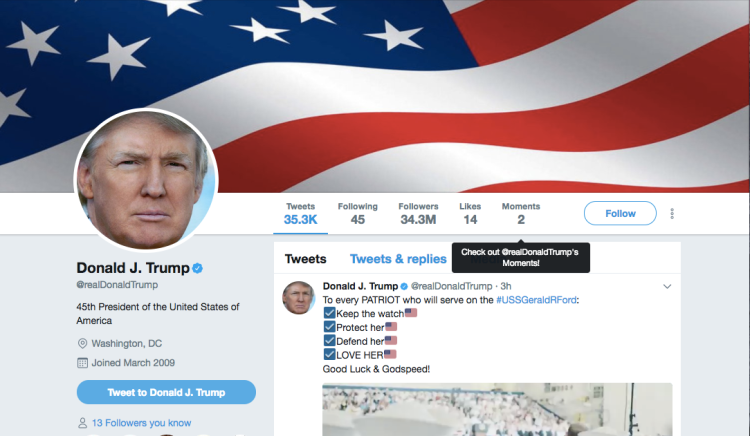 The 45th President of the United States has caused quite a stir on social media in ways no President has before. His tweets especially are characterized by his vulgar, forthright, and often cutting businessman personality and style, packing quite the punch into 140-characters.

The Twitter dynasty started in May 2009. Donald Trump, a more private individual known for his billionaire business ventures and “The Apprentice” television fame as its former host, announced his appearance on the Late Show with David Letterman through a very professional tweet.  Back then, he utilized Twitter in the way typical of many professionals. He promoted his book, “Thinking Like a Champion” published that year, shared his upcoming media appearances with the world, and posted his own quotes in order to build his personal brand and his network. Surprisingly enough and in stark contrast to the present, his political side was silent.

All of a sudden, in 2011, the Donald Trump we know on Twitter today erupted like a volcano. That year, he made his opinions on political matters known, criticizing the Republican Party, then-President Barack Obama’s Patient Protection and Affordable Care Act (nicknamed “Obamacare”), and even other popular influencers in the media (and was often called out for an arrogant, bullying tone). He started to tweet, retweet, and reply to influencers rapidly. He did this so rapidly that by 2016 when he was running for president, according to a BBC article, he averaged 375 tweets a month. This lasted through the end of November and the election.

According to Mike Berland, a political operative who worked on Hillary Clinton’s 2008 campaign and the CEO of strategic research and analytics firm Edelman, in an article in The New York Times, “We’ve never seen this before in politics…This is a continuous Trump rally that happens on Twitter at all hours.”

Despite controversy over Trump’s presidency, he has ushered in a new digital revolution of Twitter interaction between influencer and consumer. Unlike many other politicians, the tweets come directly from his voice, building his fan base. His constant opinion on current issues can at times cause backlash, but even these negative interactions allow him to attract attention. Twitter users know that they can engage with him at any hour on the platform and he will respond.

As the President of the United States, Trump is naturally a trendsetter and newsmaker. His Twitter presence adds to his power and influence on the world and ignites conversations. While many Americans have characterized his behavior on the social media platform as “unpresidential” in recent polls, it may be solace for these users to know he is subject to the same online rules. In all, it will definitely be interesting to see how Trump’s tweets are archived for future generations.