If I were to choose the top-five greatest moments in my life, at least three would revolve around sports, and one would be the Philadelphia Eagles winning Super Bowl LII. Having grown up as an athlete, as well as an avid fan of this franchise, I was inspired to minor in Sport Management and pursue a professional career in the sports industry. PRSSA’s recent trip to the Philadelphia Eagles NovaCare Complex was not only a thrilling occasion for a football fan like me, but also served as a unique opportunity to learn more about prospective positions in the field!

Nick Michaels told us about his role as a senior account executive for corporate sponsorships. He thoroughly expressed the advantages, as well as the hardships, of organizing brand collaborations for the Philadelphia Eagles. Michaels explained that not only is convincing brands to partner with this organization an issue at 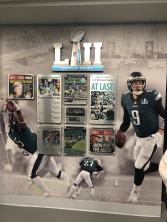 times due to the large fiscal agreement, but agreements can also evolve into prolonged projects that could take up to three years to negotiate. Michaels also explained how vital it was to the Eagles organization to collaborate with brands with like-minded principles and values, but nonetheless, many successful sponsorships transpired despite the lengthened preparations. One of the most lucrative and leading examples of fruitful sponsorships Michaels mentioned was Dunkin Donuts’ “Eagles Win. You Win!” This is where fans would receive a coupon for a free coffee on their mobile app the day following an Eagles win. Initially, this sponsorship was to bolster usage on the Dunkin Donuts’ Mobile App, however; it became so successful that Dunkin began to charge consumers because they were consequently losing profits. Listening to Nick Michaels and his experiences as an account executive for corporate sponsorships provided an alternate perspective about the fundamentals that comprise designing large sponsorships and brand collaborations.

Next, Alli Waddington, a public relations specialist for the Eagles, explained her day-to-day responsibilities to maintain a positive image for the organization. On Eagles game days, Waddington distributes media credentials, pregame materials, and in-game statistics, as well as transcribes and distributes post-game quotes tothe media. In addition, Waddington further prepares booklets that are to be distributed to important media sources, which contain pertinent information such as members in the organization, player profiles, and player statistics. Waddington provided great insight about the ins-and-outs of sports PR, and listening to her accounts about working for such a reputable organization was fascinating!

Lastly, Carly Pennacchia, the Eagles Community Relations Manager, oversees and administers the organization’s outreach programs, drawing upon donating and fundraising efforts as well as organizing player appearances. Pennacchia described the Eagles establishment as a “family organization,” emphasizing how the organization has developed program initiatives to give back to the community and highlight individuals who go above and beyond the organization’s “power from within” mantra. Pennacchia listed and explained just a few of the many organizations the team is involved in, including the Eagles Playground Build, which identifies local schools to transform barren schoolyards into rich recreational areas, as well as the Eagles Autism Challenge, a program dedicated to raising funds and awareness for Autism. By bringing the love of a franchise and the experience of participation, Pennacchia’s drive and skills pertaining to community engagement are inspiring!

The Eagles organization has made tremendous strides to empower the Philadelphia community and fans alike. Having grown up as a huge supporter of this franchise, I was constantly aware of the organization’s lucrative brand sponsorships, favorable broadcasts, and moving philanthropic efforts, however; I regularly pondered who the individuals were that contributed to the Eagles success off the field and how they acquired their roles in the organization. After meeting with Nick Michaels, Alli Waddington, and Nick Michaels, I have gained valuable insight on how to pursue a career in the sports industry, as well as the diverse positions the industry holds. Furthermore, I am so grateful to have had the opportunity to participate in this eye-opening experience and learn about the opportunities I could have in my future!